This is a guest post by Jobe Cousins, an IT expert and gadget enthusiast who currently writes for printer cartridges and office supplies company, PrinterInks.com.
The QWERY keyboard layout is one which most of us have grown up with. Designed in 1870 by Christopher Latham Scholes, it is the most commonly used format in the world. The name comes from the first six letters on the keyboard reading from left to right. The layout came into widespread use as it was patented for the ‘Sholes and Glidden typewriter and became even more popular after the design was sold to Remington in 1873. In 2013, it is still the default layout for most of the keyboards sold worldwide. However, there are alternatives out there and here we take a look at a few of them below. 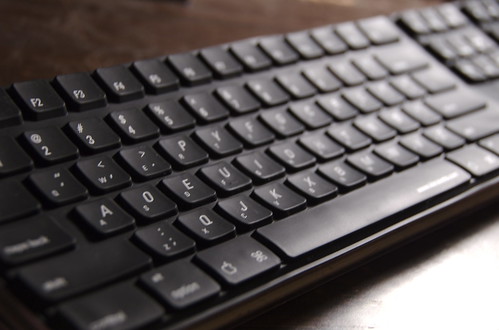 Image by:  zappowbang
This is a layout which was designed to specifically address some inherent weaknesses found in the QWERTY layout. It was created by Dr. August Dvorak and Dr. William Dealey and patented in 1936.   Also known as the ‘Simplified Keyboard’, it’s a  faster keyboard as it removes some of the awkward features that are evident in QWERTY  such as allowing for more letter combinations to be typed with both hands which produces a more rhythmic approach and makes the typing faster. Also the Dvorak layout avoids awkward finger motions and letters which don’t have to be crossed over to the same extent. This keyboard caters more for the majority of typists with the most common letters on the right hand side which is the opposite case with the QWERTY layout.  Most of the keystrokes (70%) are performed on the home row as opposed to the top rows which some say reduce the chances of repetitive strain injury.

This keyboard layout was designed as an alternative to both QWERY and Dvorak. It was developed by Shai Coleman with a strong emphasis on ergonomic design and specifically for English touch typing. There are many advantages to Colmak over QWERTY and it doesn’t take that long to learn. Finger movement is significantly reduced, because you use your fingers 2.2 times more on QWERTY than you do with Colmak which has obvious advantages for fatigue avoidance and strain. You can also type up to 35 times more on the home row than you can with QWERTY.  Colmak is a credible alternative because it has created lot of time consuming changes whilst maintaining many of the features that users have grown accustomed to such as the well known short cuts, i.e. ‘CTRL+’ functions. Colmak also caters for over 40 different languages which will attract a whole range of users. 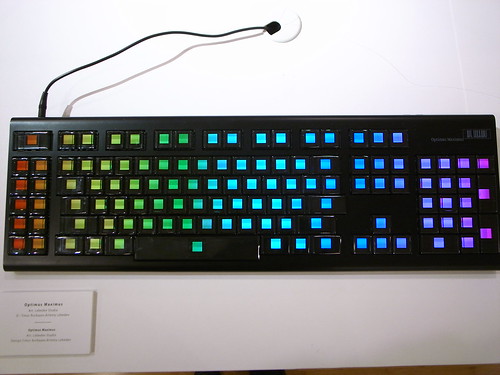 Image by:  na0905
Designed by Artemy Lebedev, the Optimus Maximus keyboard is an ambitious move away from the standard keyboard formats.  This system differs greatly in a sense that it allows for greater interaction with the user. Each key is effectively a standalone display and shows which function is currently in use. If the shift key is pressed for example, it would illuminate an upper case picture. Optimus Maximus is suitable for a variety of different language layouts such as Ancient Greek, Cyrillic and Arabic as well as catering for HTML codes and maths functions. The keyboard buttons can easily be moved for replacement or when they just need cleaning.
There are other alternatives out there which are also proving that users don’t have to rely on QWERTY.  Of course many will still prefer to stick with its tried and tested formula but as computer and software manufacturers evolve we will most likely see a demand for more revolutionary keyboards.
Have you tried an alternative keyboard? Or are alternatives to the ‘standard’ a silly idea? Tell us your thoughts either way in the comments below.