As we all know the key to a cracking adventure or fantasy movie is the presence of a mysterious artefact that holds the key to all manner of magical powers, and will quite possibly signal the apocalypse if in the wrong hands. Warehouse 13, which starts on the SCI FI Channel this Tuesday [tonight] at 9pm, gives the world’s most mysterious artefacts a home. The show is about two government agents (think Mulder and Scully with more laughs) who are assigned to the mysterious Warehouse 13 and must track down the world’s most dangerous artefacts. So now seems like a great time to give a rundown of the movies’ top ten paranormal artefacts. 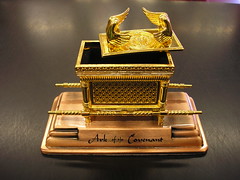 The Ark
According to the bible the Ark of the Covenant  was the container that held the tablets of stone which were inscribed with those Ten Commandments that we all adhere to. In reality this Ark could prove to be a fascinating historical find if in fact it did exist, but the probability of its contents having the power to melt the faces of evil Gestapo officers remains to be seen. But that’s exactly what happens in Raiders of the Lost Ark, and it’s also why The Ark has made the list.

Crystal Skulls
Okay, so in terms of iconic status the MacGuffin in Kingdom of the Crystal Skull can’t compare to that in Raiders of the Lost Ark, but the fact remains that a crystal skull is very cool. I’d quite like to have one sitting on my mantelpiece, but I think those crystal eye sockets would put the fear in me eventually. For alternate use of a Crystal Skull in movies check out horror sequel House 2.

Excalibur
It’s an age old metaphor for destiny – only the chosen one will be able to pull the sword from the stone and go on to wield it in battle – a theme which has been used in everything from Greek mythology to children’s cartoons. But as legendary as this trial of destiny is, the image of The Lady of the Lake claiming Excalibur in John Boorman’s film of the same name is just as iconic.
Roswell Wreckage
Alongside the assassination of JFK the Roswell incident is probably the most well known conspiracy theory going. If the movies are to be believed the metal from the UFO in question is able to reshape itself at will and do some bizarre things to local gravity. For an underappreciated version of events take a look at the 1994 TV movie Roswell starring Kyle MacLachlan.

The Holy Grail
Possibly the daddy of all movie artefacts due to the fact that not only is it one of the key ingredients in the King Arthur fable, but it’s also had the distinction of being the focus of an Indiana Jones movie (haven’t they all?). The Grail Knight sequence at the end of The Last Crusade may grate in a similar way to the end of Kingdom of Crystal Skull, but at least it’s an opportunity for another bad-guy-melting moment – “You chose poorly!”
Puzzle Box (Hellraiser)
It sounds so intriguing. Not to dissimilar from messing around with a Rubik’s Cube on a rainy afternoon… No. It will take you to a horrendous hell-like underworld where leather clad demons skin you alive with hooks and chains. If you’re lucky you’ll seep back through the floorboards of your house and suck on human flesh to regain human form. Then it begins again. I’ll stick to Tetris. 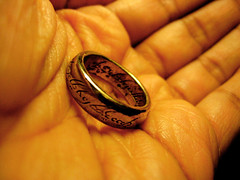 The One Ring
I’ve always wondered, if the Ring renders the wearer invisible why was Sauron not invisible when he wore it? Perhaps he was such a badass he simply chose not to, like “Hey, check it out, I’ve got this ring and I don’t even need it.” Arrogant. Anyway, the tiny Ring of Power is responsible for the longest quest in film history.
Necronomicon
Or the Book of the Dead as the Evil Dead trilogy would have us believe. The Necronomicon was originally a fictional book devised by horror author H.P. Lovecraft, but in modern movies it will be forever remembered as the scourge of bumbling hero Ash in Sam Raimi’s Evil Dead trilogy. Of particular note is the scene from Army of Darkness where the Necronomicon attempts to eat Ash’s hand.
The Golden Fleece
It may sound like this year’s must have fashion accessory but the Golden Fleece refers to the fleece of Chrysomallos from Greek Mythology. Featuring in Jason and the Argonauts, Jason was required to claim the Fleece in order to claim his right to the throne. With remake fever already tapping up Clash of the Titans don’t be surprised if Jason and the Golden Fleece make a reappearance in the not too distant future.

Pirate Treasure
Okay, so it’s not an individual artefact itself but as a general plot device cases of gold plundered on the high seas and buried on some far flung island have been pretty handy over the years. Most recently of course the Pirates of the Caribbean trilogy has benefited from such booty. And who can forget The Goonies? That One Eyed Willy – what a generous man he was to build a sequence of theme park rides leading to his galleon full of gold.
What would you list as your top ten paranormal artefacts? Got something that should have made the list, or something think shouldn’t be there? Let us know in the comments!
CategoryMedia
TagsArtefacts Fiction Movies Paranormal
Using Google Trends for Blog Ideas
Nixie Clocks go Steampunk