Staying at the Yotel

My Internet connection has been restored – so I can post again!! Sorry for the interruption.
The Yotel chain came to my attention way back in March as a cool new take on the Japanese capsule hotel. Not quite sleeping tubes, but not quite a normal hotel either. I decided to check it out for myself while on a trip to London. 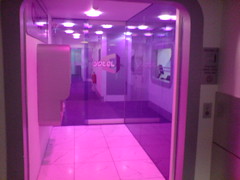 Arriving at Gatwick’s South Terminal, you find the Yotel by heading to International Arrivals and taking the lift down one level. The first thing that hits you when the lift doors open is that there’s an incredible purple glow coming from an archway… which, it turns out, is the Yotel. Good way to make an impression!
Check-in is very easy. There are two terminals in the archway where guests can enter their booking number and insert their credit card. The terminals print out a receipt which tells you what room you have and gives you your free wi-fi password, and a keycard is issued that lets you into the Yotel proper.
The standard room is tiny (which is kind of the point). It’s around two metres deep, and three or four wide. Having said that, it doesn’t feel cramped. There’s an LCD TV mounted on the wall at the foot of the bed, so you can lie there and watch, or use TV Internet. There’s a pull-out desk (which I just used to stick my suitcase on), and a folding chair stuck to the door should you want it. Then there’s the bathroom, which has a toilet, small basin, and a monsoon shower. The bathroom is done as a “wet room” (i.e. no shower tray), which saves a bit more room. 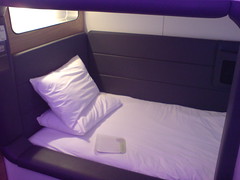 OK, so that’s what’s here, but what’s it like to stay in? The lighting is very relaxing (kind of purple), and the bed is very comfortable. The kid in me loved the fact that the bed is enclosed and has a telly, because it felt almost like some kind of little den! There’s free wi-fi (the access code is the same as your booking number). The overall look is very sci-fi; almost like something off the Nostromo 🙂
The Yotel website claims that their cabins contain much the same stuff as a 4-star hotel room. I don’t get to stay in many 4-star hotels, but compared to the Peebles Hydro (where I have been lucky enough to stay) I can say that I certainly didn’t feel I was in an inferior hotel. The Yotel is very well equipped, especially considering the size of the rooms!
The location of the Gatwick Yotel within the airport is very handy – it was a simple job to head out in the morning and catch the train into central London.
Oh, one problem I did have was that had some trouble ordering my breakfast in the morning because of a glich in the system (you order it through your TV). Oddly enough, though, it turned out that my order did happen, despite me being told it hadn’t. So I was able to pick up a lovely bacon roll and coffee on the way out to catch the train. Normally it would have been brought to my room but I had decided to leave sharp because I thought I would have to get something in the actual airport. 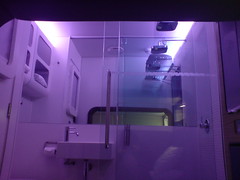 The bathroom, viewed from the bed

There’s not much else to say, really: Yotel does exactly what it says on the tin… it’s a small, but very well-equipped hotel room. It’s hi-tech and comfortable. If you’re looking for somewhere to crash for a few hours, it’ll fit the bill nicely.
All photos for this item were taken on my camera-phone – sorry for the lack of quality! More photos can be seen here.